Azamgarh is an important town of historical significance in Uttar Pradesh.Named after its founder, Azam who was the son of Vikramajit, a descendant of the Gautam Rajputs. Many arresting, imposing structures from the Rajput era are spread out across the city, giving it a royal, vintage look. Moreover, Azamgarh acts as a gateway to other historically important cities like Ayodhya, Kanpur, and Bareilly.Azamgarh is an important town of historical significance in Uttar Pradesh. Azam’s father, Vikramjit had converted to Islam and married a Mohammedan woman. Hence, Azamgarh is largely a Muslim city with strong influences of its erstwhile rulers still visible today. Later on, Azamgarh became a hub for Islamic literary scholars, theologists and poets. 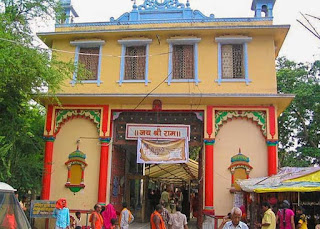 Sankat Mochan Hanuman temple or Sankat Mochan temple is located in the southern part of Varanasi, At a distance of 2 km from Assi Ghat and 8 km from Varanasi Junction. The temple is dedicated to Lord Hanuman, the monkey God of Hinduism, it is one of the holy temples in Kashi and also one of the top places to visit in Varanasi. The term ‘sankatmochan’ refers to reliever of all problems.

Legend has it, that Tulsidas, the author of 'Ram Charita Manas', the Hindi version of the 'Ramayan', originally written by Valmiki in late 1500 AD, founded the temple after a vision of the Lord Hanuman at that spot. The holy text was discovered in 1623 and has been in the temple since 1701. It is written in the Awadhi dialect which is part of the eastern Hindi language family.

According to Astrology, Hanuman saves human beings from the anger of the planet Shani (Saturn), and especially people who have an ill-placed Saturn in their horoscopes visit this temple for astrological remedies. This is supposed to be the most effective way for appeasing Shani. While it is suggested that Hanuman did not hesitate to engulfe in his mouth the sun, the lord of all planets, which humbled all the gods and angels, making them worship him for the Sun's release. Some astrologers believe that worshiping Hanuman can neutralize the ill-effect of Mangal (Mars) and practically any planet that has an ill effect on human life.

Apart from the everyday visitors, thousands of devotees gather here on occasions like Hanuman Jayanti. A special procession known as Shobha Yatra is also arranged which starts from Durgakund Temple. The temple also organizes 'Sankat Mochan Sangeet Samaroh', a classical music and dance festival every year in the month of April, in which musicians and dancers from all over India take part.

Posted by Rajesh at 3:24 AM No comments: